The apex body of Nigerian Muslim Ummah, the Nigerian Supreme Council for Islamic Affairs (NSCIA), under the leadership of the Sultan of Sokoto, His Eminence, Muhammadu Sa’ad Abubakar has said that some mosques and Muslim worshippers are now the targets of protesters’ violence in some parts of the country. 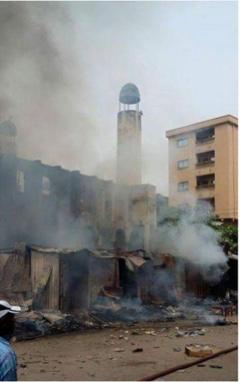 A statement issued yesterday by the Chairman, Media Committee of NSCIA, Femi Abbas said that from reliable information reaching them the current #EndSARS protests embarked upon by Nigerian youths across the country appears to have assumed a dangerous religious posture.

While condemning the #EndSARS protests, which, the NSCIA however warned that the protest has turned violent across the country.
The statement read: “The attention of Council has been drawn to a dangerous trend recklessly emerging in certain parts of the South-East and South-South of Nigeria with unbridled impunity.

“The Council is well informed that the Muslims in those regions are now living in fear of uncertainty, having been marked for possible annihilation or massacre, for practicing a religion other than Christianity.

“The danger in this development is that a precedent is being aggressively set for a religious war, the consequences of which no one can predict with precision. The incidents that led to the current nationwide protests are well known and well defined”, it stated.

The Council said as a country, Nigeria has enough political and economic problems to grapple with, already: “Therefore, adding any religious dimension to those problems may spell doom for this giant of Africa”, it stated.

“In matters of provocation and aggression, the NSCIA has been patient enough, but it cannot be forced to go beyond its elasticity limit as an apex religious body with millions of worshippers as its members”, it added.
The Council called the attention the Inspector-General of Police (IGP) on the dangerous development, “the escalation of which may precipitate a deleterious situation for Nigeria”.